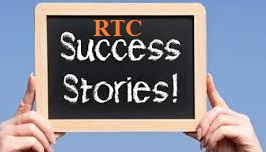 Unlike the usual trend of featuring an alumnus for this segment, this month we are happy to feature a phenomenal Instructor whose approach to teaching and learning differed from many. Miss Yousaf passed through the walls of our great training center in November, 2016. She led the team of Instructors who successfully delivered a pilot course on Countering Violent Extremism - Community Policing. Happy reading!!

Can you briefly introduce yourself, focusing on your law enforcement career?

My name is Fozia Yousaf. I am an immigrant to the United States. I received my University education and law degree from the United States. After passing the bar exam, I worked as a prosecutor for a few years after which I joined the United States (U.S) Federal Bureau of Investigation (FBI). As an Agent for the FBI, I worked on the Joint Terrorism Task Force.  It was during this period that I began to learn about and investigate cases on violent extremism. Most terrorism investigations were long and complicated and required a team effort.

How has your cultural knowledge influenced cases you have investigated?

What motivated you to specialize in trainings in anti-terrorism methods and techniques?

After the attacks in New York City on September 11th 2001, I began to train Agents and Police on community sensitivities and cultural understanding.  My training was well received which stimulated me to expand my courses and go into fulltime training. Countering violent extremism training continues to be a topic of concern and a focus of my training.  I have also expanded my training to radicalization issues, with a focus on recruitment of foreign fighters.

Violent extremism continues to expand as there have been many concerns raised by international organizations regarding the rise of violent extremism. Would you agree with this statement?

I do agree that violent extremism has become an issue for the world community.  The narrative of the extremist propaganda is very seductive to vulnerable individuals. Some of these individuals may not understand the implications of their decision to join an extremist group. Others may choose violent extremism as justified action for their cause.  There are many more reasons that may cause individuals to join, what is important is that a country has an understanding of this path to extremism so that they can have an effective counter strategy.  Countering violent extremism is only a partial law enforcement issue; other entities have an important role in preventing counter extremism. Countries are continuing to counter the extremist message and educate vulnerable individuals to take non-violent options.  Recently in the United States, an individual who attempted to join ISIS was arrested at the airport. He was released from prison very early (less than two years) and required to attend counseling and probation.  This enabled him to continue in college and hopefully become a productive citizen, instead of spending 20 years in prison.

In what ways do you think violent extremism can be countered if not eradicated?

Countering violent extremism will be a significant international effort. Countries have not been able to agree on the causes of extremism so we are not close to solving the problem. Having fewer wars and providing a better alternative to individuals is a start.  Wars create extremism and extremism creates wars. In any war, people will take sides. Historically, the vacuum created provides an opportunity for extremist groups to develop.  Another cause could be community marginalization and discrimination. The solution is for the government to lead a community effort to counter the extremist propaganda and the reasons that individuals join. This includes educating the community, the families, the police and the individuals. Focused law enforcement efforts and a counter cyber program are essential. Around the world countries are trying different solutions with limited intermittent success. By depriving the extremist groups of the people they need, we can limit their reach and destruction.

The sad fact is that one country’s problems rarely stay within that country’s borders.  So, I think the surrounding countries will impact Ghana at some point. One can look at what happened in Somalia and realize that Somalia’s problem has impacted the entire region and the world. Working with other countries and increasing border control efforts is a step in the right direction.  However many borders are porous and this makes the problem harder to control.  The refugee problem is a result of the wars and extremism.  If individuals fleeing violence are allowed into a country, how well they are integrated, assimilated and welcomed will ease future problems.  Kenya’s Somali community is an example of the challenges faced by refuges and by the host country.  By depriving the extremist groups of the people they need, we can limit their reach and destruction.

Finally, I know this is your first time in Ghana, what will you miss the most after your departure?

I will miss the people and the culture. I enjoyed learning about the Ghana culture and was very impressed with the people that I interacted with.  The beautiful clothing and tasty food was an additional pleasure. The tourist sites were very impressive and I am looking forward to my next visit. Africa has always been my favorite continent and the diversity it offers from region to region is a traveler’s enjoyable challenge.

Post by Esther Afari . Esther  is one of the Delegate/Alumni Coordinators at the West Africa Regional Training Center. Email her at info@westafricartc.org