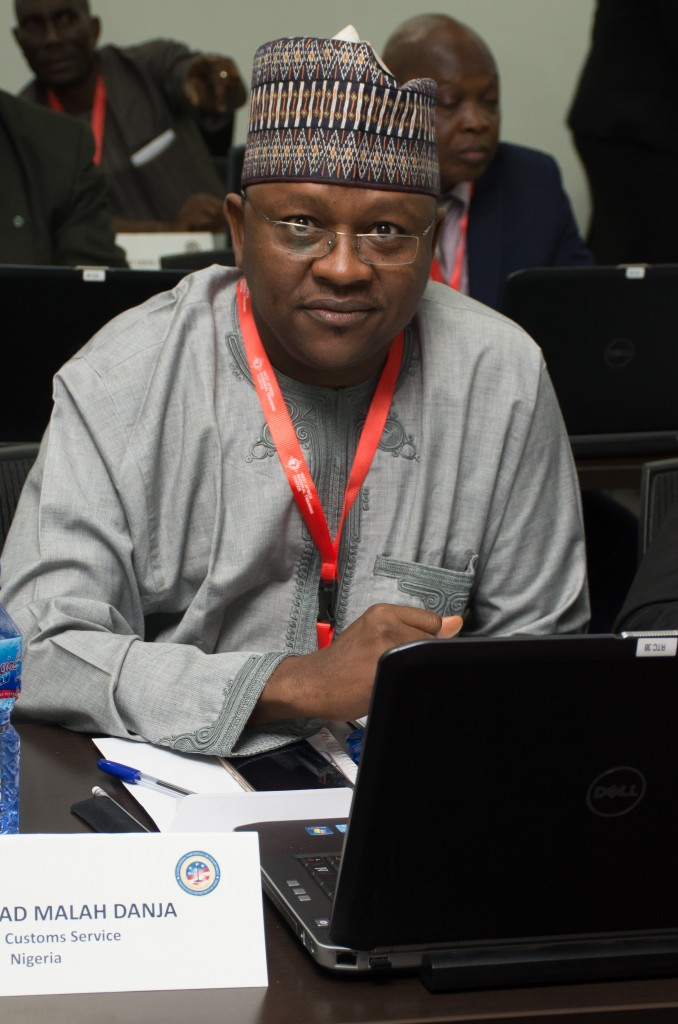 We are proud to feature a Nigerian alumnus who attended the 2014 border Interdiction training and had the opportunity to partake in this year’s border interdiction course. Let’s see what he has been up to after the training. Stay tuned!

Can you briefly introduce yourself and tell us what you do as a customs officer with the Nigerian Customs Service.

Mr. Muhammad Danjah during the International Border Interdiction Training at the RTC in May 2017

My name is Mr. Danjah and I work with the Nigeria Customs Service. I am a Chief Superintendent of Customs and also the officer-in-charge of operations in the Kaduna/Katsina Command Headquarters. My duties as chief operations officer include overseeing all anti-smuggling activities in my command area and other related customs duties assigned to me by the customs controller-in-charge. In my line of duty as a customs officer, I have been able to make lots of seizures and also partook in the arrests of many smugglers.

Our records show that you were at the RTC in 2014 for an International Border Interdiction Training.  Can you share with us some of the knowledge you acquired from that course and how it has helped you as a customs officer?

I must say that I gathered a lot of experience and knowledge from the course I attended in 2014. Some of the knowledge that I acquired helped me in interdicting some smugglers and contraband goods around the Jibiya Border (i.e. a border town between Nigeria and Niger).  Interestingly, two officers, with whom I attended the training, also worked on the Niger side of the Jibiya border. After the training, we have been able to communicate and collaborate to make the Jibiya border very unattractive for smugglers.

Judging from the IBIT course you attended in 2014, what would you say are your impressions about the current International Border Interdiction Training?

I personally learned a lot from the course that I attended in 2014. The course was very productive and I also met a lot of people from different countries. I can confidently say that the course that just ended has been an improvement as compared to the one that I attended in 2014.  Apart from learning a lot from the resource persons, we were also given some tools that will enable us to carry out our duties very effectively at our various border stations. I want to show my appreciation to the instructors for that kind gesture.

After the 2014 IBIT course, by what means did you communicate with other participants and how often do you do that?

We often communicate via mobile phones and emails to discuss work-related issues, share intelligence and sometimes talk about our friendship and families.

Would you say that RTC created that platform for you to be able to communicate with other law enforcement officers in different countries?

Absolutely! The last time I was here, I met different people from different countries. This time around, there are people from Tanzania, Sierra Leone and Ghana. I believe this is going to help foster a serious relationship which will enable Africa have total control over certain issues simply because law enforcement officers are communicating among each other.

Do you think this can go a long way to help fight transnational organized crime in Africa?

Oh Yes! But there is also the need for some level of continuity. One way the RTC can contribute to this continuity is that, the RTC should indicate in their letters of request that, officers nominated for trainings should have at least five years of service before they go on retirement. The courses organized by the RTC are very strategic and there is the need to have officers who can go back to their countries and impart the knowledge to other officers over a period of time before they are relieved of their duties.

Having worked in collaboration with your colleagues (from 2014 IBIT course) on the Niger side of the Jibiya border, I believe you might have worked on a number of cases together. Drawing on the techniques and knowledge learned from the RTC, can you share with us one particular case that you successfully handled?

One particular case that comes to mind is an operation that we carried out to seize tons of cough syrups that contained some amount of codeine in 2015. Codeine syrup in general is used for treating cough and other upper respiratory symptoms caused by allergies or common cold. It is also used as a pain killer, but students and other users abuse it by using it in excess. Research has shown that some of these codeine syrups contain ingredient that are psychoactive. When people take these syrups in excess, they show symptoms similar to people who are addicted to cocaine, heroin and other hard drugs.

In 2015, upon tip-off from our Nigerien counterparts, we were able to interdict six (6) huge containers of codeine syrup. Around that same period, the National Agency for Food and Drug Administration and Control (NAFDAC) in Nigeria had restricted over-the-counter access of codeine containing cough syrup because of its adverse reactions on users. Upon careful interrogation, we established that the transporters (smugglers) were not authorized to import the drug in question into Nigeria. It was also established that they intended to smuggle it into Nigeria through Niger. Because codeine containing cough syrups are not restricted in the latter country, they used Niger as the source country to smuggle the syrups into Nigeria where it is in high demand. The confiscated drugs were destroyed in Katsina in the glare view of some dignitaries to ascertain Nigeria Customs commitment to fighting against the import and export of restricted and illicit drugs. As we speak now, there are four (4) containers of similar drugs that have been seized and they will be destroyed very soon in the presence of the general public. These are some of the successes that we have chalked since the last border interdiction training we attended in 2014.

For this current training, I have made friends with participants from all the participating countries, i.e. Tanzania, Ghana and Sierra Leone. I am looking forward to establishing more contacts after I get back to Nigeria.

What would you describe as some of your major take-aways from this year’s border interdiction training?

I am taking away so many things from this training session. First of all, I am taking away new established friendship. This is very important to me because as we communicate and share ideas and information all the time, we are able to achieve our mandate of securing our borders and making the continent very safe.

Secondly, with the knowledge acquired, I am going to put them into practical use. There have been so many improvements in this course as compared to the one I attended in 2014. Also, the tools that were given to us are going to go a long way to help facilitate our duties at the border stations. We hope to see a lot of positive results from this training.

When I entered the facility on the first day, I asked one of the staff members if RTC owns this building. I was impressed about the new facility because everything looks more organized. It looks more spacious and also has a lot of training rooms as compared to the old location. I also love the hotel accommodation and the fact that all participants are being lodged in the same hotel. This makes it much easier to transport all participants at the same time to the center, unlike in the past where participants were lodged in different hotels which made it difficult to bring them to the center on time. I think these new arrangements have taken care of some of the lapses that I experienced during my last trip.

Do you have any additional comments to share with the RTC and all RTC Alumni?

To begin with, I would want to commend the RTC for its monthly newsletter that it shares with the RTC Alumni. This creates a big platform for knowledge sharing and exchange of ideas. I really appreciate the efforts of the RTC in its core mandate in making the world a more peaceful place. I know the RTC has trained and equipped a lot of officers with the requisite basic skills in intercepting drugs and other items that can be harmful to users and non-users alike. I am so confident that, if we get a lot of officers trained here at the RTC, we will see a lot of changes in our countries with respect to enforcing laws.

Mr. Danjah, It has been very interesting and educative interacting with you. We are very glad to hear that the RTC trainings have had some impact in your line of duties. We  appreciate your time for this brief interview and wish you a safe journey back to Nigeria.