Getting the Gun by Dr. Michael Schlosser 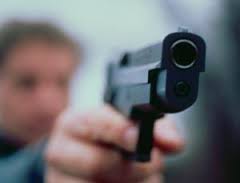 This month, we are happy to feature an article written by Dr. Michael Schlosser, the Director of the University of Illinois Police Training Institute. Please keep in mind that all these ideas are researched by the RTC for the sole purpose of enhancing law enforcement skills in the area of handling your weapon. We hope readers find this article very useful. Happy reading!

At some point in a law enforcement career, you may be faced by an assailant who is pointing a handgun at you. The assailant may have taken your duty weapon from you or produced a handgun of their own. Officers may wonder how they will react if confronted with this situation, which is why training for this critical situation is essential. Circumstances dictate tactics. Imagine yourself in such a situation. Does the assailant possess your handgun? Their own handgun? What is the assailant's demeanor? What is the assailant saying or not saying? What is the distance between you and the assailant? Is there cover nearby? Do you have a backup gun?

There are several disarming techniques. I will describe three.

For the horizontal twist technique, you can bring one hand to the front of the weapon while moving the other to its rear, turning the handgun toward the assailant and maintaining a good grip. Importantly, this must be one simultaneous movement, with your forearms crossing. This twisting motion will weaken or dislodge the assailant's grip on the handgun.

If this movement alone does not cause the assailant to release the handgun, you should create a strong base by lowering your center of gravity and widening your stance. Then quickly and forcefully pull the handgun away from the assailant toward the center of your abdomen, using the muscles in your back and biceps. This technique has the advantage of comprising just one simple movement, regardless of how or in what hand(s) the assailant is holding onto the weapon. While learning this technique, you can decide which hand feels more comfortable grabbing the front of the handgun and which hand feels more comfortable going to its rear.

The vertical twist technique can be done in two different ways. If the assailant is holding the weapon in their right hand, you can grab the gun with your left hand while stepping off line to the left. Your left hand should then strongly hold the assailant's wrist and arm in place. With the right hand, rotate the gun backward, directly toward the assailant's wrist. The key to this movement is to rotate the gun in a tight circular motion, quickly and forcefully.

After Disarming the Assailant

Once you've disarmed the assailant, create distance, give commands to the assailant, and assess the threat. You can create distance by pushing, striking, and/or retreating. If you have recovered your own weapon during the struggle, you should "tap/smack" to make sure the magazine is seated properly, and "rack" in case any brass is hung up in the ejection port, and get a fresh round into battery. If you have taken away the assailant's weapon, you should now draw your service weapon.

There is never a foolproof technique to disarm a subject with a gun. Options include immediately disarming the assailant, waiting for the right moment, using de-escalation communication, getting to another weapon, and even retreating. Your best option will depend on the situation.

As with all skills, it is important for officers to train and practice often. You can never have enough repetitions of any skill or technique. As the saying goes, amateurs practice until they get it right; professionals practice until they cannot get it wrong.  Read more on http://www.policemag.com/channel/weapons/articles/2017/01/getting-the-gun.aspx

Post by Collins Agyare . Collins  is one of the Delegate/Alumni Coordinators at the West Africa Regional Training Center. Email him at info@westafricartc.org