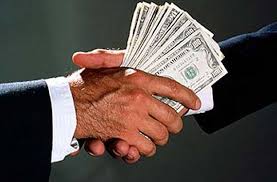 Corruption is mostly understood to be anything that is morally unacceptable in a given community. This concept covers a wide range of activities including misuse of power and misappropriation of public funds for personal gains. This act is mostly attributed to public officials like politicians, civil servants, or anyone who has been given the authority to act on the behalf of the government. Examples of public corruption include nepotism and abuse of power.

Corruption can also occur within the law enforcement environment. It is expected that officers within law enforcement should not go contrary to the law. However, it is surprising to find many corrupt officers breach their code of ethics and conduct.

Below are few examples of corruption within the L.E community

This is one of the most common forms of corruption. Bribery occurs when an L.E officer accepts something of value in exchange of a decision that will be in the favor of the offeror. A perfect example is offering an officer a huge amount of money in order not to arrest a suspect. Another example is when officers are influenced to allow illegal goods to go through borders without any security checks.

This is also another form of corruption where an officer threatens an individual with the aim of obtaining money or acquiring property. Considering this form of corruption, an officer, in his line of duty, might threaten to have someone falsely accused or persecuted if the person does not meet his demand. Mostly, the victims feel very vulnerable and consequently have to do the bidding of the demanding officer.

In a situation where officers are investigating cases involving drugs and other illegal activities, they are sometimes faced with options like dropping charges, making evidence disappear or protecting the territories of crime lords. This kind of protection encourages criminal activities and places the community at risk. It is sometimes difficult to arrest these crime lords because they get protected by the corrupt officials

Though officers may be morally trained, they are sometimes tempted to go wayward. Some of these temptations can be irresistible. A typical example is when a large sum of money is retrieved from a successful raid involving narcotics. At this instance, officers are likely to take advantage to withdraw some funds or drugs for their benefits.

Corruption of any kind, whether in the public sector or the within law enforcement, is a very serious issue that needs the highest form of attention.

Corrupt activities impede development in any state. When allowed to continue, it will lead to poor economic growth.

Not only does corruption undermine our institutions and devalues our democracy, it also deprives citizens of their constitutional and human rights.

The society tends to loose trust in officers who have been mandated to uphold the laws governing them and protect them against criminal activities. Whenever citizens loose trust, there will be no collaboration between them and the law enforcers.

Considering the pointers above, it is incumbent on all officers within the L.E community to desist from all forms of corruption in order to ensure a safer environment.