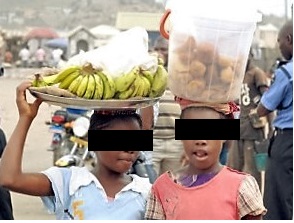 "Child Street Hawking is a development that has unfortunately been allowed to thrive in the African society. A visit to traffic-laden spots of major cities in West Africa – Abuja, Lagos, Accra, Abidjan, Lome, Porto Novo, Kumasi, Cotonou, Bamako, Dakar, Banjul, Ouagadougou, Monrovia, Freetown, Niamey, Ndjamena, Conakry, et al – reveal an ugly scenario that adequately typifies the unfortunate West African situation; children are seen hawking snacks and wares to commuters and other road users even during school hours, to the detriment of their well-being. Such is the state of affairs that defines the effectiveness (or not) of the Universal Declaration on the Rights of the Child, African Charter on the Rights and Welfare of the Child  and other international and regional policy documents that support the well-being of the African child.

Young children hawking on the streets

Child Street Hawking is child abuse. Child Help International define child abuse as “when a parent or caregiver, whether through action or failing to act, causes injury, death, emotional harm or risk of serious harm to a child. There are many forms of child maltreatment, including neglect, physical abuse, sexual abuse, exploitation, and emotional abuse.” A situation analysis of child abuse and neglect, undertaken in 2013 through the medium of major newspapers in the West African sub-Region, found that child abandonment, sexual abuse, child neglect, kidnapping, and hawking were the most reported forms of child abuse and neglect. According to the African Network on Prevention and Protection against Child Abuse and Neglect (ANPPCAN), Street hawking “is the recruitment, transportation, transfer, harboring or receipt of a child by means of threat or use of force or other forms of coercion, abduction, fraud, deception, abuse of power, a position of vulnerability or the giving or receiving of payments, benefits to achieve the consent of a person having control over the child for the purpose of exploitation.”  Article 2 of the African Charter on the Rights and Welfare of the Child refers to a child as “every human being below the age of 18 years”.

Street hawking entails selling of various items on the streets especially heavy traffic spots, such as soft drinks, bottled and sachet water, beef and sausage rolls, plantain and potato chips, bananas and oranges, sweets and gums, power banks for phones, sunshades, etc.  More often than not, children who are sent out for street hawking rhetorically query why they are being made to carry trays of wares from one location to the other in a bid to make money for their supposed benefactor, while their fortunate peers are studying in schools. Most trafficked and poor children who fall victim to this inhuman and pitiable condition have since resigned to fate and tow the religious path by considering their situation as an act of God. The most heartbreaking part of it is that the exploiters – who sometimes are their own parents – hardly provide for these children the basic subsistence of food, shelter and/or clothing. Every morning, under rain or sunshine, these children are seen on the streets wandering like sheep without shepherd. And to further embellish the situation, we all see these children and even patronize them!

Research has revealed that some parents in towns and cities in Africa withdraw their children from school in order to send them on hawking duties so as to make money for the family upkeep. Consequently, some of these children end up dropping out of school for a term or even a whole year, and when they get back to school (that is if they go back at all), they become too big for their cohort and hence, fall victims of stigmatization by classmates. This type of situation could have many negative effects on the child. Apparently, child exploiters who are sometimes parents/guardians do not realize this and children do not know that the healthy regime of mental, moral, social and material inheritance in the society can only be passed from generation to generation through formal education. Child Street Hawking is adduced to so many factors. Some of these factors are:

The risks facing child hawkers in modern day West Africa are indeed daunting, even for matured adults. These child hawkers are exposed to reckless drivers, savages and intimate predators. There are several cases involving girls as young as ten who are sexually active and who trade in sexual favors for money alongside whatever commodities they are hawking. This scourge is not limited to the female gender alone as male children also fall victims to sexual offenders as well. The consequences of these acts include unwanted pregnancies, illegal and unsafe abortions, sexually transmitted diseases and psychological trauma. The streets have nothing to offer child hawkers save frustration and psycho-social disorientation.

In a bid to curb the menace of street hawking in Nigeria, the State Governments of Lagos and Kaduna have officially placed a ban on street begging and hawking in order to sanitize their respective metropolis. This is seen as a positive development as it would improve the security of the States in question and create windows of opportunity for the children to go back to school. These bold initiatives should be commended and emulated by other State Governments in Nigeria, and major Cities in the West African Sub-Region.

To eradicate child street hawking, parents and guardians should be discouraged from engaging their wards in hawking. Intensified sensitization and reorientation programs should be conducted by the various Governments in West Africa on the ills of child hawking and other forms of child abuse. This should adequately enjoy the support of ECOWAS.

More so, West African States that are yet to adopt, domesticate and implement provisions of the Child Rights Act should do so in order to protect children from exploitation. Furthermore, Governments at all levels should embark on educational Schemes to ensure that education from primary to junior secondary school level is compulsory and free. The educational policies should go beyond lip services, but rather implementation should be taken seriously.

Efforts of the ECOWAS Commission should be intensified towards combating trafficking in persons, smuggling of migrants, forced labor, and child labor. These crimes contribute in no small measure to sustain child abuse in the West African Sub-Region.

To this end, child street hawking is inhumane, dastardly and should not be encouraged. All hands must be on deck to stop Child Street hawking in order to safeguard the future of West Africa."

For comments or questions on this article, please write to us at info@westafricartc.org