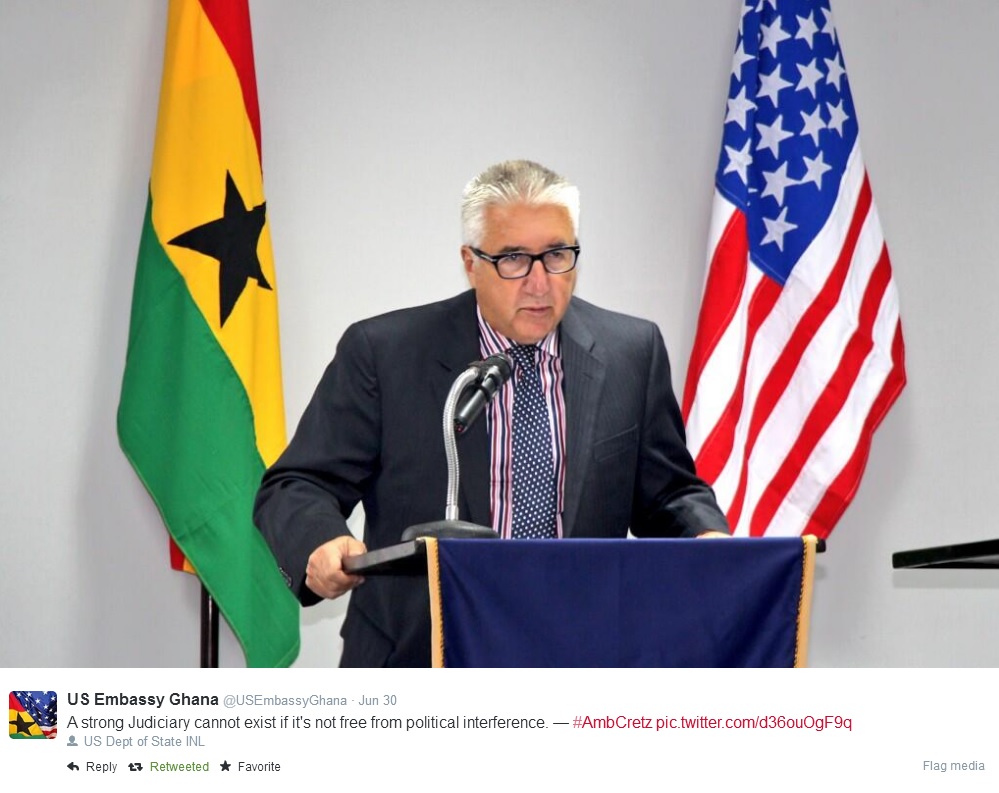 Good evening everyone.  Welcome - Akwaaba - and thank you for joining us.  We are here tonight to celebrate U.S. Independence Day. That is the day Americans remember the historic events of July 4, 1776, when our Continental Congress issued a Declaration of Independence from British rule.

181 years later, Ghana followed our lead and also gained independence from Britain, and now Ghana has become one of the United States’ most important partners on the African continent. We work together on a wide range of issues we both care about:  economic growth and development, democracy and good governance, and peace and security.  The State of our bilateral relationship has never been better and our commitment to the Ghanaian people’s welfare and development has never been more evident.

Two months ago, I joined Vice President Amissah-Arthur in leading a high-level delegation of Ghanaian government officials and private sector companies to Houston, Texas, where we participated in a global conference on offshore oil and gas.  We are confident that trip will lead to more involvement by American companies in developing Ghana’s petroleum resources.

This past year, we made sure that almost two million children got tested for malaria and almost three million pregnant women had access to malaria medicines.

We also helped laboratories at three regional hospitals gain four-star ratings through the World Health Organization. This means doctors and patients can now have more confidence in lab results.  Ghana, by the way, is the first country in West Africa to achieve this standard.

And just last week the National AIDS Control Program announced that Ghana’s HIV prevalence rate dropped to 1.3% in 2013, down from 3.6% in 2005.   I’m proud that PEPFAR, our President’s Emergency Plan for AIDS Relief, in collaboration with the Ministry of Health, the Ghana Health Service, and the Ghana Aids Commission played an important role in that decline.

Over the past decade more than 500 schools have been built in Ghana by American taxpayers. In 2013 alone, we helped young Ghanaians get nearly $8 million in scholarship money to study in the U.S.  And we regularly run training sessions on IT and business skills that have so far reached over 1,000 young people in every corner of Ghana – from Bolgatanga to Takoradi, and from Wa to Ho.

I’m especially pleased that this year, partnering with the Ministry of Chieftaincy and Traditional Affairs, we were able to help fund a research project on the Elimination of Harmful Traditional Practices.

We have the oldest, and one of the biggest, Peace Corps programs here in Ghana. I’m proud of all 136 of our Volunteers, but I want to tell you about one I met last month: she is based at the deaf school in Koforidua, and will soon be launching a book of sign language to support Ghana’s deaf community.

We have been keen backers of helping Ghana develop its critical power sector. We hope to conclude negotiations soon for a second Millennium Challenge Compact worth $500 million for projects in the energy sector.

The United States and Ghana also work together to support peace and security. This year the West Africa Regional Training Center, a joint partnership between our two countries, trained over 1,000 security officials, judges, and prosecutors from 17 African countries.

Since I arrived in Ghana two years ago, our Drug Enforcement Agency, working with its Ghanaian counterpart, arrested three dozen high-level narcotics traffickers, dismantled a half-dozen international criminal organizations, and seized approximately 500 kilos of cocaine and 30 kilos of heroin.

Next month President Obama will be hosting the U.S. – African Leaders Summit, which will focus largely on trade and investment.  We’re delighted that President Mahama will be leading a strong delegation to Washington, DC to take part in this historic event.

The second new program is President Obama’s Young African Leaders Initiative, or YALI.  YALI is a major effort by our government, along with top American corporations and partners across Africa, to invest in the next generation of African leaders -- the young people who will increasingly shape political, economic, and social progress in Ghana and across Africa.

Currently, as part of YALI, 18 young Ghanaian leaders are in the U.S. taking part in leadership development programs. We look forward to welcoming them home in a few weeks, and then working with them to continue the joint project of building a better future for Ghana.

Let me end tonight by thanking the American companies that helped make this evening’s event a success. We greatly appreciate the partners that stepped forward to sponsor our festivities.  Their support is emblematic of how companies that represent the “American brand” in Ghana are helping to develop this nation.

Thank you, and Happy Independence Day!