Report on The Role of the Judiciary by an RTC Alumnus 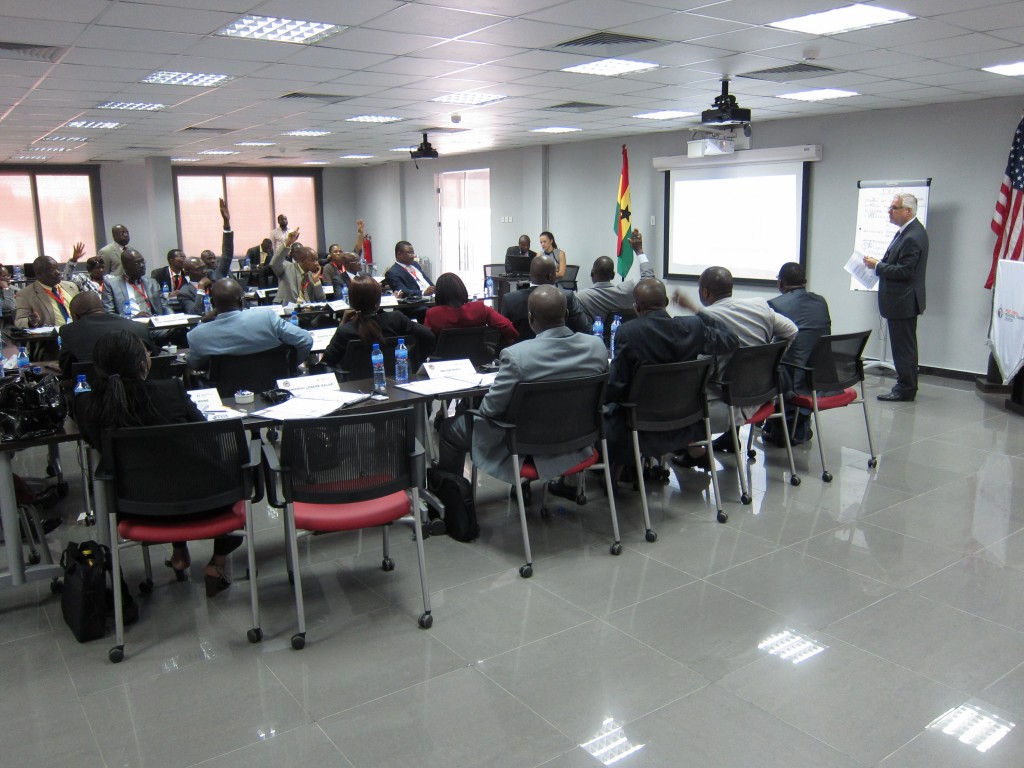 In December last year, the RTC hosted a course on The Role of the Judiciary in a Democratic Society, for Francophone judges. One of our judges from Guinea wrote an extensive report on the course that we would like to share with you. It is always inspiring to read participants’ perspectives on their experience so please take time and enjoy the read!

Judges engaged in active discussions throughout the week.

“For the past five (5) years, the government of Guinea has undertaken an extensive judicial sector reform. Among the measures taken to ensure the success of the project is judicial staff training. To achieve the goal, several partners including the United States have decided to support our country.  It is within this context that the Guinean Government, with the support of the American Embassy, sent six (6) judges to participate in a workshop organized by the Bureau of International Narcotics and Law Enforcement Affairs of the United States Department of State (INL).

This training brought together thirty (30) judges from five Francophone West African countries, namely:  Benin, Côte d’Ivoire, Guinea-Conakry, Togo and Senegal; each country sent six (6) representatives. The theme for the workshop was: ‘‘THE ROLE OF THE JUDICIARY IN A DEMOCRATIC SOCIETY’’.

This very important theme for our countries was discussed over a period of (5) days and it was facilitated by experts.

These experts took turns to make presentations on several modules on the theme, including the following:

Prior to the commencement of the discussions, the RTC Coordinator presented the background information on the Regional Training Center to the Government delegates after the latter had taken their seats. She indicated that following an agreement signed in July 2012 between the government of Ghana and the American government, this institution was established in Accra (Ghana) and the Bureau of International Affairs (INL) of the U.S .Department of State finances and steers the RTC to build the capacity of the region to carry out investigations and fight against transnational organized crime. For this reason, the INL also ensures coordination with other organizations and American governmental bodies to provide training programs at the RTC.

Regarding the experts, during their brilliant interventions, they made a comparative study between the Francophone judicial systems of Africa and the Anglo-Saxon system, in particular the American and Canadian ones. For instance, according to the experts, in the area of recruitment in Canada and the United States, one must have been in the profession as a lawyer for at least twenty years before applying for recruitment as a judge through a competitive entrance examination.

The composition of the courts in these states and decision-making are based on the principle of collective responsibility. In a criminal trial, the prosecution which is the Public Prosecutor of the United States and the Attorney General of Canada and the defense lawyers are placed on an equal footing; In the Francophone countries of Africa, they made extensive presentations on the independence of the judiciary vis-à-vis the Executive and the Legislature, the principle of security of judicial tenure, the competence of judicial staff, job improvement and the issue of corruption in the judiciary and sanctions against corrupt judges.

They did not conceal the need to bring justice closer to citizens who go to court by building new infrastructure for the judiciary, recruiting, training and equitably distributing the staff in order to reduce the lengthy and costly court procedures. Furthermore, they emphasized the collaboration between the judiciary, civil society and the population by way of awareness raising and popularization of legal texts in the local languages and the publication of costs to facilitate access to justice and avoid over-invoicing and extortion from the population.

The experts made in-depth presentations on the mode of addressing civil law and economic cases, transnational crime and the establishment of a system of networking. The quality of the speakers and the importance of the subjects stirred up the interest of the participants who asked relevant questions. The five-day (5) workshop was also characterized by group work and discussions in plenary sessions which resulted in the sharing of experiences among the participants who were apparently confronted with similar realities in their respective countries.

These discussions led to the following recommendations by the participants:

The deliberations came to an end with the Program Manager of the West Africa Regional Training Center - RTC expressing his full satisfaction and appreciation for the excellent work done by the experts.”

Judges working on their action plans

We encourage participants and alumni to write to us and share their training experience. Remember you can always send an email to info@westafricartc.org to submit content.