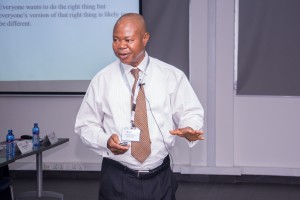 A complaint is an allegation by someone that another person has committed a crime. It is a claim without any proof. An allegation, therefore, cannot constitute reasonable suspicion or provide reasonable grounds for that person to be arrested. Our power of arrest is directly linked to the principle that there ought to be an investigation to establish that reasonable grounds exist for an arrest.

In many criminal investigations, the standard of evidence that are  required to make an arrest should be enough to establish reasonable suspicion or reasonable grounds. Officers are therefore mandated by law to arrest a citizen if the officer finds reasonable grounds that the suspect committed the alleged offence. A significant number of complaint-based arrests are made daily without warrant by the police in the course of their work. Thus, it is very important to adhere to the provisions of the law in order not to infringe upon the rights of people.

In Ghana, for instance, the law on arrest states in section 10(2)(a) of The Criminal Procedure Code, Act 30 of 1960 that ‘a police officer may arrest without warrant a person whom the police officer suspects on reasonable grounds of having committed an offence’ The power of arrest, therefore, is exercised on the basis that arresting officers or their supervisors have reasonable grounds that the person to be arrested committed or is in a way connected with the alleged crime.

Law enforcement agents in the West African sub-region are reminded to take a critical look at their laws on arrest in order to avoid abuses. They are also urged to conduct result-oriented criminal investigations which are prosecutable.

Advantages of this approach