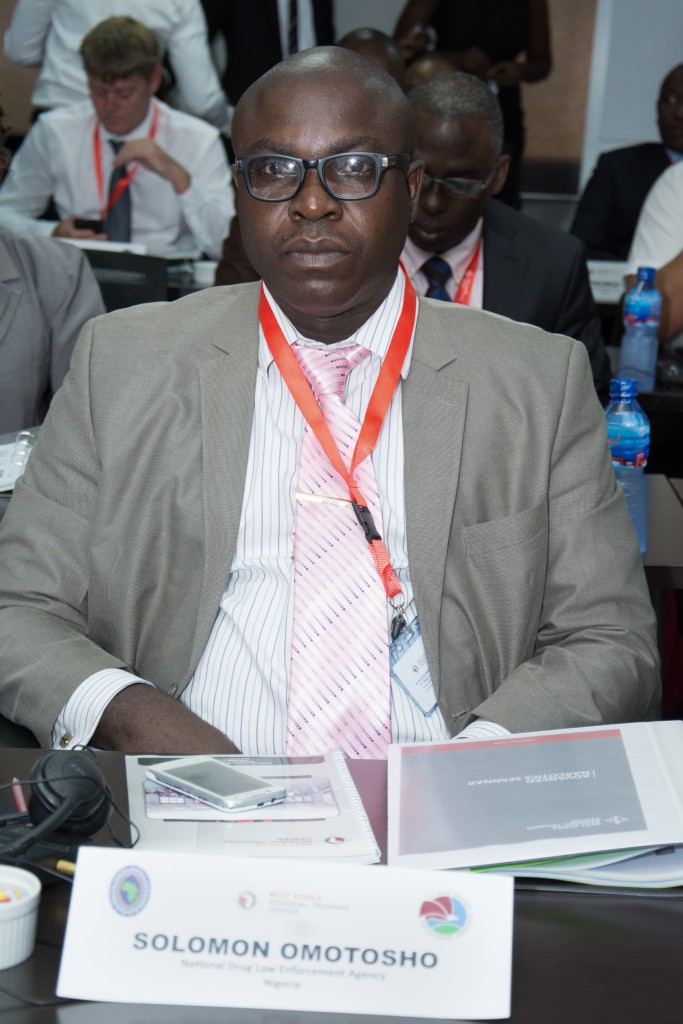 It is always great to receive constructive feedback from our alumni about the progress they have made in their careers since their time at the RTC. For this issue, we are proud to feature Mr. Omotoso from the National Drug Law Enforcement Agency.

Could you briefly describe yourself and your law enforcement career?

What would you say motivates you in your drug law enforcement career in Nigeria?

Mr. Omotoso during the Chemical Diversion course at the RTC.

What motivates me most in my drug law enforcement career is the collaborative effort of our international partners, such as the US-Drug Enforcement Agency (DEA), UK-National Crime Agency (NCA) and other forms of support we receive in the form of technical assistance, trainings and equipment. These International bodies have directly injected real life and proactive dynamism into NDLEA operations in Nigeria. Indeed, it was the effort of these International partners through the US Department of State, Bureau of International Narcotics and Law Enforcement Affairs (INL) that made the establishment of a TACTICAL TEAM possible. Another motivating factor is the establishment of a Sensitive Investigative Unit by the US-DEA and the Combined Inter-Agency Task Force (CIATF) by the UK’s NCA. These two special units are the propelling engine of NDLEA in the areas of Operations, Investigations and Intelligence. All the ground breaking arrests and seizures in NDLEA from 2014 to date came from this unit. I can categorically say that my performance in my drug law enforcement career in the last four years as a member of SIU accounts for the productivity in my field of work. This unprecedented record can majorly be attributed to the partnerships which exist between NDLEA and our International Collaborators. Another motivating factor is my personal resolution to contribute my own quota to the peace of the society to be devoid of drug menace. My goal is to be of great service to the development of humanity where crime will be reduced to the barest minimum.

Our database shows that you have attended a number of courses on drug law enforcement here at the RTC. How has these courses helped in your work with the NDLEA?

All the courses and trainings I have undergone at the RTC and other training facilities across many nations have exponentially upgraded my investigative and intelligence driven capacities in all ramifications. Through these courses, I have been able to conduct all round investigations into drug crimes, leading to forfeiture of assets and freezing of bank accounts. All these courses have greatly helped me in compiling excellent case files for the prosecution of the arrested suspects, which has led many to jail. In addition, these courses have helped me in observing safety precautions in operations such that we have not recorded any human casualty in the last four years in our operations. In discovering, processing and dismantling Clandestine Laboratories, these courses have contributed immensely in achieving all these results.

Can you please share some of your successful operations with the NDLEA?

I have taken part in many operations and I have successfully led officers on many outstanding operations. I will be glad to share just three (3) out of those successful operations .Those three operations are captioned as follows:

OPERATION HERBICIDES: This operation took place in March, 2015 in Nigeria. The operation covered the destruction of cannabis plantations in four (4) different forest reserves in the country. During this process, two (2) Cannabis warehouses were also discovered. This particular operation involved the use of sixteen (16) vehicles with one hundred (100) officers, out of which sixty-five of them carried firearms. This led to the arrest of four (4) suspects at the two cannabis warehouses with the total cannabis seizure of 41.04 tons. Fifteen (15) cannabis farms measuring 222,320 square meters, 11 cannabis nursery beds measuring 137 square meters and cannabis seeds weighing 147.5 kilograms were all destroyed. In addition, many electronic gadgets and household items were seized and many vehicle documents, bank transaction documents, telephone sim cards and numbers were recovered and those seized items greatly assisted in the course of investigation and prosecution. One unique feature of this operation is that the seizure of over 41 tons of cannabis in the two warehouses in one single operation was the largest at that time in the history of NDLEA.

OPERATION ORUMBA: This operation came in two phases, with the first phase having the arrest of three (3) suspects with 23.1 kilograms of Crystallized Methamphetamine in Nigeria in February, 2015. This arrest and seizure led to the second phase of the operation in the month of May that same year. It occurred in three (3) different States in the country simultaneously covering different targets. Two hundred and thirty-three (233) officers, forty-two (42) vehicles and one hundred and sixty-eight (168) firearms were used for this second phase of the operation. This led to the arrest of three (3) suspects. Two out of the three suspects were arrested with some precursor chemicals and heating metals used in clandestine laboratories. These chemicals included Hydrochloric Acid, Sodium hydroxide, Iodine, Acetone, Ephedrine and other paraphernalia such as weighing scale, filter flask, industrial test tube, heating filter, conical flasks, hypodermic needles, masks, hand gloves, chemical tapes, extension wires, etc. The last suspect was arrested with 2.615 Kilograms of liquid Methamphetamine and 250 grams of Crystallized Methamphetamine in his clandestine laboratory. During these operations, five (5) vehicles were seized together with three (3) big mansions and one business warehouse was shut down. Also, millions of Naira in their bank accounts was frozen awaiting final forfeiture order from the Federal High Court. These cases are in various stages of prosecution at both Federal High Courts in Awka (Anambra State) and Lagos. Two Clandestine laboratories were brought down during these operations in Anambra State.

OPERATION RED MUD: The intelligence for this operation was sourced from the investigations conducted during operation Orumba during that same year. Based on the intelligence available, a series of undercover operations, call details analysis, surveillance activities and other investigative strategies which were employed in tracing and tracking down other Drug Trafficking Organizations operating both locally and internationally, this resulted in the arrest of one notorious drug trafficker, who was arrested at the Lagos airport on his return from Enugu State. Prior to his arrest, two teams of officers had been mobilized to the two seaports in Lagos for profiling of the containers billed for export to South Africa covering a given period. Fortunately, the suspect’s consignment was traced to one of the sea ports. The container was loaded with Nigerian foodstuffs, such as cartons of Indomie noodles, Golden Morn (cereal), bags of gari (cassava flakes), bags of melon, bags of beans, jerry cans of palm oil, packs of magi cubes, cartons of Guinness Stout, cartons of malt drinks among other items. However, inside, this container was concealed 266 kilograms of methamphetamine and 310 kilograms of Ephedrine, disclosed in the packs of Indomie noodles/Golden morn and 17 jerry cans respectively. The drug lord was arrested together with the owner of the forwarding Agency.  Two big properties along with two cars of the suspects were seized within Lagos. Their bank accounts were frozen and physical cash of $50,000 (fifty thousand dollars) and N297, 000 (two hundred ninety seven thousand Naira) were seized.

Which of these operations would you count as your most successful story? After a successful operation (e.g. seizure of a contraband, freezing of assets, etc.), how do you feel as a drug law enforcement officer?

The operation I will count as my most successful story is that of Operation Orumba. This is because their trafficking network was dismantled, their clandestine laboratories were destroyed and their drug trafficking organization was defeated. In addition, the operation resulted in the seizure of a lot of precursor chemicals for the manufacture of methamphetamine, exotic cars, gigantic buildings, laundered business ventures were shut down, many bank accounts with millions of Naira were frozen, and above all those criminals behind the crime were sent to jail to face the full wrath of the law. Most importantly, I feel fulfilled as an officer because there was no single casualty throughout the operations. Some of our youths have been saved from these merchants of death, who believe in making money through illicit drug manufacturing and trafficking, thereby truncating the destinies and future of our youths. A great success indeed!

Would you recommend any RTC trainings to a colleague law enforcement officer given the opportunity?

With the array of training equipment at the RTC and the caliber of dedicated and experienced instructors and staff, I would wholeheartedly recommend every training I have attended at the RTC to my law enforcement colleagues, especially Financial Investigation training and Clandestine Laboratory Course. In conclusion, if given the opportunity, I will suggest courses on Terrorism financing and Inter-Agency collaborative mechanism for African Law Enforcement Officers as they are lacking adequate skills in these vital areas.

Post by Collins Agyare . Collins  is one of the Delegate/Alumni Coordinators at the West Africa Regional Training Center. Email him at info@westafricartc.org