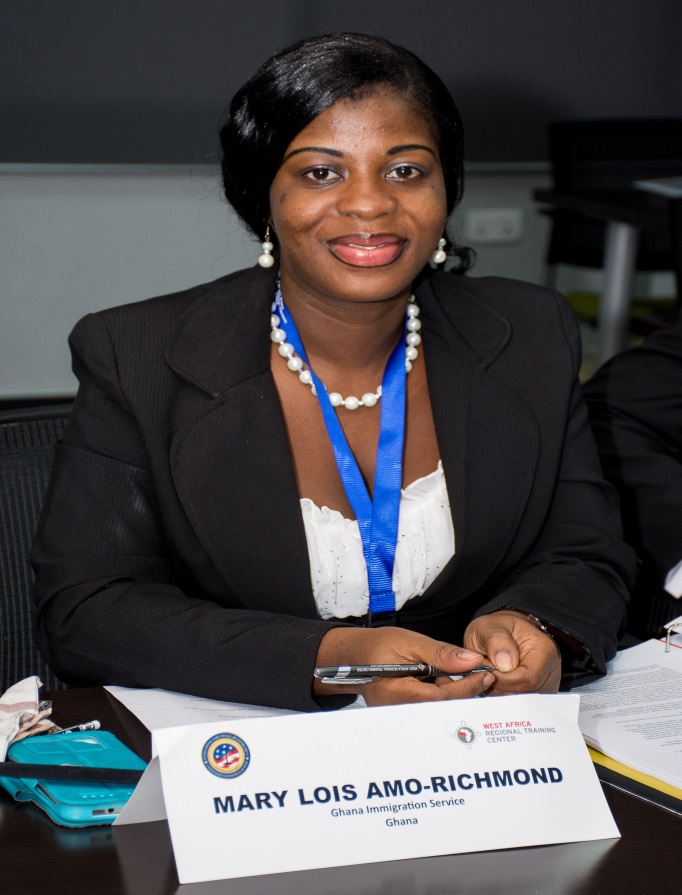 The fight against human trafficking in Ghana

Human trafficking is a global crime that threatens the life of many vulnerable men, women and children. The fight against human trafficking is a collaborative effort of governments, law enforcement officials and individuals across the globe to help bring traffickers to justice.  I’m proud to mention that one of such efforts was demonstrated by an alumnus of the RTC, Madam Amo-Richmond, Deputy Superintendent of Immigration, and the District Commander for Winneba Command.  I would like to use this opportunity to acknowledge and appreciate her hard work. Let us discover below how she has significantly contributed to the fight against human trafficking in Ghana. Enjoy Reading

Could you briefly introduce yourself and share a bit about your law enforcement career?

l am Madam Amo-Richmond. I joined the Ghana Immigration Service in 2007 as a cadet officer and passed out from training as an Assistant  Superintendent  of Immigration. I diligently worked at the Kotoka International Airport for some years and was later promoted to the rank of Deputy Superintendent  of Immigration. Through hard work, commitment and dedication, I was given the mandate to head the Winneba  Command as the District Commander of the service and I have been the officer-in-charge till date.

As a law enforcement officer, how have you or your organization significantly contributed to the fight against human trafficking in Ghana?

In January 2014, I embarked on a 3 year project dubbed ‘Combating the Trafficking of Children for Labor Exploitation in Effutu’ with the goal of contributing to the effective prevention and abolition of trafficking of children for exploitative employment.

The project aimed at exposing human rights violation against children and preventing the unlawful trafficking of children in our societies. With approval and assistance from my organization, I led a team of officers that conducted a survey and identified 15 different communities within the municipality that were prone to human trafficking.

We created awareness and sensitized the selected communities on the negative effects of this phenomenon on the children, the society and the nation as a whole. We did this through house-to-house outreach campaigns, which covered about (300) three hundred households as well as evening community sensitization and video programs which hosted about (1000) one thousand community members.

We also created a mass movement against child trafficking and organized a strong vocal group to fight against child exploitation through public education, awareness creation in churches, community durbars and radio & television broadcasting.

In addition, we embarked on   capacity building workshops on child / human trafficking to educate various stakeholders in the society such as security officers, assembly members, opinion leaders, reverend ministers, pastors, other members of the clergy as well as some community health practitioners.

We have been able to arrest some potential traffickers at various entry points and handed them over to the police to be prosecuted. We also conducted a free national health insurance registration for about three hundred (300) under privileged and needy children in these communities.

Could you outline some significant observations, difficulties or challenges inherent in embarking on this project?

We realized that poverty and the desire for better livelihood was a major factor of child trafficking. The traffickers usually entice poor parents who willingly give out their children in exchange for paltry sums of money which served as a temporal relief to them due to their financial situation. They made these ignorant parents believe that their children will be taken care of and also promised them better opportunities in life with them. Most of these parents cannot read and write to have access to information on human trafficking and other related issues. The traffickers therefore take advantage of the situation to perpetuate, exploit and abuse these children in order to make money.

One major challenge has been the refusal of the trafficked victim to cooperate with the investigation and court processes due to fear and stigmatization.  In some cases, the police sometimes lack accurate evidence to implicate the traffickers in order to prosecute them in court. Also, the level of bureaucracy and bottlenecks in our government institutions cause delay in prosecuting cases related to trafficking in persons.

What motivated you to go the extra mile to make this happen?

Well, I would say that it was just a strong desire to help put an end to this disgraceful act to human dignity. Think of it this way, the police prosecute these cases, the NGO’s do their best to rescue these victims, and the immigration has it as a mandate to prevent this activity from happening by sensitizing and educating people.

What suggestions would you give as recommendations to these challenges?

I think that victims should be well spoken to and be rest assured that nothing will happen to them when they cooperate with the investigators. I also recommend that, proper investigations should be conducted and more evidence gathered before going to court for trial. Lastly, I suggest that workers in our institutions be spoken to and asked not to delay in their responsibilities.

What is the focus of the project for the last quarter of the year?

Our focus remains the same, the difference is that we want to create more awareness in other communities and educational institutions between now and December 2016. Our action plan is to create awareness and educate students of the Community Health Nursing School, Winneba Senior High School, A.M.E. Zion Girls High School and Winneba Business School on human trafficking, visa fraudsters and the legal way to travel. Also, we plan on doing the same for children, parents and fishermen in a village in Winneba called “warabeba” on the dangers associated with human and child trafficking. In addition, we will distribute stationaries like books, pencils, pens, erasers, sharpeners etc. to children in the village.

Lastly, the project seeks to register (1000) one thousand needy and less privileged children under the National Health Insurance Scheme and also provide them with insurance cards to get access to free healthcare.

Do you have any final remarks you would like to give?

I would like to conclude by saying that, the prevention campaign team of the Ghana Immigration Service at the Winneba Command is working assiduously through education, outreach programmes and capacity building workshops to help combat this menace in the municipality and needs the support of all in order to achieve its goals.

Thank you Madam. Amo-Richmond.  We appreciate the time you made for this interview. We hope that the success of this project will motivate all our alumni who are working hard in the fight against trafficking in persons and other related crimes. We wish you the very best in your future endeavors. If you would like to be featured in our next “Alumni in Focus” segment, please send an email to info@westafricartc.org and we’ll schedule an interview.

Post by Esther Owusu Afari. Esther is one of the Delegate/Alumni Coordinators at the West Africa Regional Training Center. Email her at info@westafricartc.org