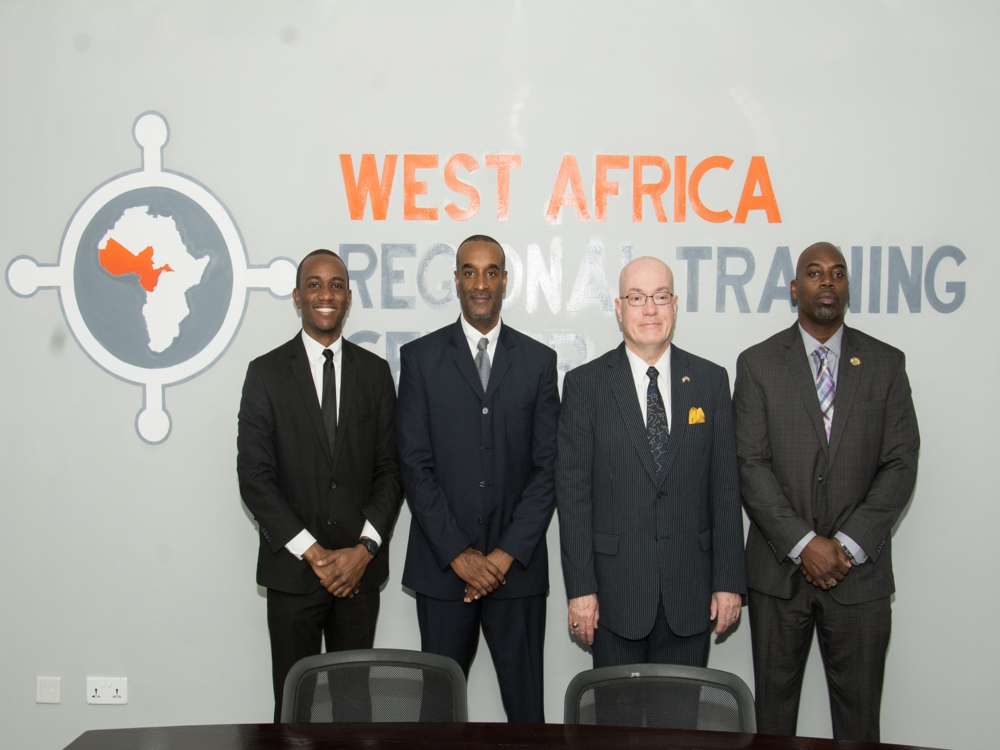 Mr. Moore ( left ) with officials from the embassy

The RTC’s work is supported by numerous US. Government officials, who work tirelessly behind the scenes to ensure the success of our training programs . For the last three years, Mr. Moore has served as the Deputy Chief of the Political Section at the US Embassy in Accra. He has constantly supported RTC staff in our work. He is departing his post and we did not want to miss the opportunity to chat with him about the RTC’s mandate and his thoughts on Accra. Let’s hear what he has to say!

Over the past few years, you have engaged with the RTC on different projects. What are your thoughts on the RTC, as having a strategic role in the enhancement of criminal justice capacity in West Africa?

The RTC has become the principal multinational criminal justice training center in West Africa. Its recent relocation means that it will have even more room to grow under Director Hayward Lampley.

Having physically observed a couple of training sessions, what are your major takeaways on the training (facility, students, instructors, curriculum and staff)?

The strength of the RTC training method is that it links criminal justice sector officials from around the region with their counterparts in other countries who are working on the same issues.  It was always great to see so many West Africans coming together to solve common problems their countries face.

Can you speak briefly on your thoughts on the criminal justice sector, specifically in Ghana and what you envisage for the next couple of years, especially on USG-GOG collaboration?

While there are still issues within Ghana’s criminal justice sector, I believe it is better than it was when I arrived in Ghana in 2014.  You’re seeing more convictions on all types of transnational organized crime.  I attribute that success to the government’s efforts and assistance from the international community.

On a lighter note, do you agree that Ghana is one of the best countries in the world? Tell us about your experience in Ghana.

Haha!  I actually did a 10 part countdown of my favorite things about Ghana on my Facebook page.  Please take a look there or follow me on Instagram and Twitter at @moorediplomacy. One of my biggest accomplishments was playing a small role in ensuring that Ghana's elections in 2016 were peaceful and transparent. Our embassy team provided assistance to Ghana's Electoral Commission and sent hundreds of observers to polling stations across the country. Anyone who was in Ghana in the months before the elections knows there was a lot of talk about elections-related violence. Ultimately, the elections went off relatively smoothly and there was no widespread violence. A few things accounted for this, but I believe something that a guy in Sunyani (a regional capital) told me before the elections. He said, "at the end of the day they [the politicians] go back to their good lives...they don't fight each other...they inspire us to fight each other, but then we have to rely on each other to live." He made the point that he wouldn't allow his community to be torn apart because of an election. On a more personal level, I've enjoyed being able to walk and travel around the country without fearing for my safety. I've lived in and visited other places where this isn't the case, so I don't take this for granted.

On behalf of the RTC team, we would like to thank Mr. Moore for his support and we wish him all the very best on his future projects. We hope to see him back in Accra soon!