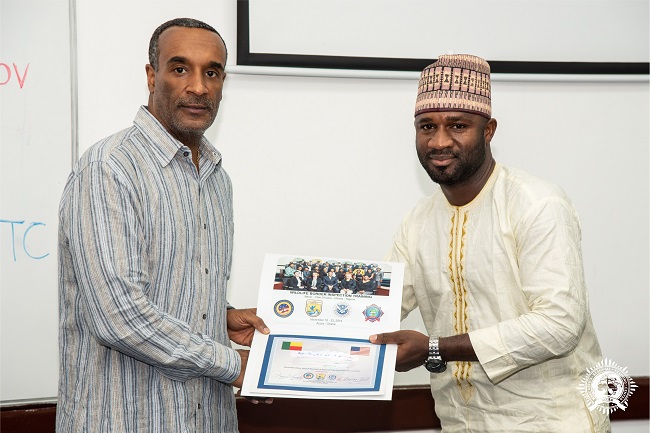 Featuring in our newsletter this month is an alumnus who attended the Wildlife Trafficking course in 2019. In an interview with him, he shared with us how he is applying lessons learned from the RTC to combat the illegal trade in wildlife species in Benin. He also shared how he has benefited from being part of the RTC alumni network. Enjoy the read

Could you tell us about yourself and your law enforcement career?

My name is Eric and I am the Chief of the Special Forest Brigade of the Port of Cotonou, Benin. I joined the forestry service as an officer and I have since risen to the rank of Captain. I have eleven (11) years of law enforcement experience with a passion for the protection and enhancement of wildlife. I am currently working to oversee the rehabilitation of pangolin population, which is the most trafficked and endangered species in the world. Prior to my current position, I held various leadership positions in the service which were all geared towards investigating wildlife crimes and protecting vulnerable and endangered species. I am also an active member of the Benin Rangers Association (BRAs), an operational arm in the conservation of wildlife and its habitats in Benin.

Could you briefly describe the illegal trade in wildlife species in Benin?

In Benin, like in all other countries, despite our law enforcement systems, which is more effective than before, we continue to record illegal trade in protected species. Such trade is mainly done via land circuits around our borders, particularly with Nigeria, Niger, Burkina Faso and Togo. The porous nature of our borders provides concealed smuggling trails that traffickers use and coverup every day. However, we have made significant progress in securing our sea and aerial borders. It is almost impossible today to successfully smuggle through these border posts. My brigade at the Cotonou Autonomous Port, in collaboration with other relevant law enforcement agencies, oversee the protection against all forms of illegal trafficking including elephant tusks and hoofs, pangolin scales and skin, chameleon skin, leopard skin, crocodile heads and skin, python skin, and others. I’d like to mention that a large quantity of illegally trafficked specimen came from conservation parks in Benin because we host a large part of the W-Arly-Pendjari Complex (WAP)  which is the most important conservation area for wild species in West Africa including 8900 elephant heads. Benin has adopted farming, with support from an NGO, to mitigate wildlife trafficking and provide alternate livelihood for potential poachers, and this is proving to be very successful. We have also adopted projects like the Minimizing the Illegal Killing of Elephants and other Endangered Species, (MIKES) which contribute a lot to conservation. In 2019 for example, about 51 kg of elephant ivory and sixty skins of different protected species were seized in Benin, Last year, the Supreme Court overturned a judgment rendered by a Court of Appeal in favor of safeguarding endangered animal species, which is a strong indication that justice at the highest level is sensitive to the fight against wildlife crime. In 2004 Benin enacted a law which sentences traffickers to 6 months to 10 years in prison or fines them between 300,000 to 800,000 CFA.

How has the wildlife trafficking course you attended in November 2019 contributed to advancing your knowledge in your field of work?

During the WTIP at the RTC, we delved into specific cases and had practical exercises with supervision from experts from the U.S. Custom and Border Protection (CBP) and the U.S. Fish and Wildlife Service (FWS). Now, I have a better understanding of international standards and this allows me to intervene in industry-related issues in accordance with internationally recognized procedures. Also, the testimonies, explanations and practical exercises presented during the training by my colleagues from the sub-region helped me appreciate a lot of new smuggling techniques traffickers are using in recent times.

What RTC skill or technique have you found useful and most applicable to your job?

The skills I acquired at the RTC have helped to increase my professionalism in law enforcement. Though these skills were not new to us, the RTC taught us the right methods with which we should apply certain techniques. With the knowledge I acquired at the RTC I was able to submit a proposal for a form of non-intrusive inspection. With this, we are working with some international partners to set up a canine brigade we will use to detect elephant tusks, pangolin scales and other smuggled goods. We will also for the first time, train dogs to sniff for wood species that are prohibited for export from Benin. Another technique I learnt more about at the RTC was targeting. We previously had difficulties ensuring 100% inspection of all incoming and outgoing shipments but since gaining more perspective on targeting from the RTC we are effectively using this technique to prevent illegal exports of wildlife and illegal goods in transit, and illegal imports. I have also found operational planning to be very useful in my line of work.

How did you share the RTC knowledge acquired with your colleagues?

Once we got back to office, my colleagues and I who attended the course organized a training session to share the knowledge we gained with our colleagues who could not attend the training. This was in line with our agency’s train-the-trainer principle. In addition to the airport and port custom officers, we also trained a total of 40 agents and staff from the Forestry Inspections units. These trainings were scheduled to run until September but has been disrupted due to the Covid-19 pandemic. Our train-the-trainer principle is that the 5 agents of each forestry inspection unit who have been trained can train the agents at the municipal level and the latter do same for those at the district level, creating a ripple effect.

Would you say that being part of the RTC Alumni network has benefited you?

Yes, absolutely! I appreciate the collaboration I have enjoyed from other colleagues within Benin and the sub-region. Before going to the RTC, I had colleagues from the Benin customs service whom I was supposed to be working with but we did not know each other well and never talked or collaborated on the job. It was at the RTC we met for the first time and started discussing collaboration on the job. We have since been sharing information. Thanks to the network, we are now developing and maintaining international contacts with whom we exchange information. For instance, I know who to contact in Ghana, Ivory Coast, or Nigeria when I am on a smuggling trail; if I have to make a controlled delivery to these countries I know who to collaborate with. Given the importance of the alumni network, I think the ILEA has to universalize the network so we can establish contact with alumni we may not have met but may need on the job. I’d like to thank the RTC for the training which was very applicable to my job. I look forward to more training opportunities.

Thank you so much Mr. Eric for sharing such great feedback with us. Write to us at info@westafricartc.org and if you would like to be interviewed. We look forward to hearing from you.