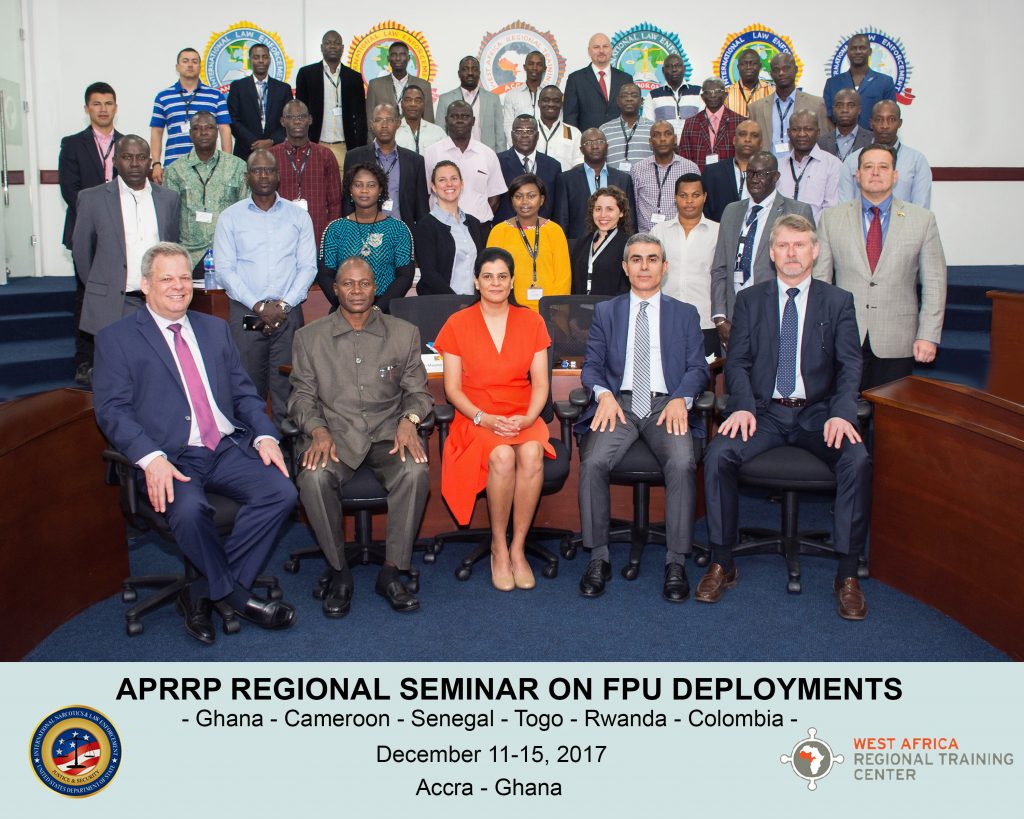 In her opening remarks at the beginning of the course, the Deputy Chief of Mission of U.S. Embassy, Accra, Ms. Melinda Tabler-Stone, emphasized the role of FPUs in peacekeeping operations and encouraged the PCCs present to take advantage of the collaborative opportunity, to build stronger policing networks amongst themselves and with the international community. Also in attendance was Ghana’s Inspector General of Police, Mr. David Apeatu, who thanked the United States Government for establishing and supporting the African Peacekeeping Rapid Response Partnership (APRRP) program and also encouraged participants to make use of the UN reference material in the application and implementation of peacekeeping policies. To further demonstrate his support and Ghana’s renowned hospitality, the IGP’s office hosted a dinner for the entire delegation, which was well attended by senior officials of the Ghanaian Police Service. The RTC Program Director, Mr. Hayward Lampley, acknowledged the seminar as the first of its kind hosted by the RTC, and noted it would further cement the RTC’s position as a strategic hub for important diplomatic engagements between U.S. and African governments. The RTC demonstrated its role as a world-class training facility during the weeklong seminar, and furthered its mandate of establishing regional partnerships and solidifying international cooperation.

A section of the participants during day 1 of the seminar

As the first of its kind under the APRRP initiative, the seminar brought together key stakeholders from the five participating countries and the United Nations. The five-day event was packed with lectures, panels and breakout sessions, which facilitated discourse between participants and seminar leaders. Participants were engaged from the very first day, asking insightful questions throughout the week. On day five, each delegation demonstrated an acquisition of knowledge, with participant led briefings on country initiatives to be implemented upon return. Participants requested that future seminars be organized for individual countries, to include train-the-trainer modules to help their various policing units to fully operationalize their FPU policies and procedures. A few participants requested that the next seminar last for five months!

The success of the seminar further demonstrates the RTC team’s commitment to its mission, to maintain the RTC as a world-class facility on the African continent. Indeed, staff from CTP’s Program Offices in Alexandria and Accra delivered a sterling performance, harnessing teamwork skills, which ensured that participants, speakers and program officers, had nothing but high praise for the team.

Looking into 2018 and beyond, the RTC envisages the delivery of many more events such as this, which highlight collaboration between the U.S. government and African Governments, to further mitigate transnational organized crime and to provide the needed capacity for law enforcement officials to effectively carry out their work.